by eswalton in Financial Planning

This blog looks at the impact of markets, volatility, and the uncertainty of timing. Furthermore, how discipline will help you.

Last time we visited the matter of a falling market and the wear and tear on your head, as it dropped.

Now we consider how to cope confidently with a market that is bouncing up and down.

Assessing the Psychology of the issue

Set your mind and your body will follow…if your mind is at ease, then you will be the same.

People prefer to have instant gratification and treat losses differently to gains even if they have the same value.

In football: a goal saved is just as important as a goal scored, but there isn’t the jubilation for a save, that there is for a goal!

According to two distinguished behavioral scientists:

Saving for retirement or any other long-term objective is hard work precisely because it requires you to:

A bit like you should be washing the dishes rather than having a glass of wine in front of the TV after dinner, even though you know that the dishes will be a bigger problem tomorrow.

Any investment objective can benefit from the pound cost averaging technique across time and different market conditions.

When stock markets are unusually volatile, for example during the COVID-19 pandemic, rules about investing have even greater usefulness.

Following an investing rule overcomes the temptation to try and time the markets, which can go disastrously wrong if markets whipsaw 10% in a day, as well as incurring trading costs and fees. Pound cost averaging can be a disciplined way to take advantage of volatile markets.

Pound Cost Averaging – how it works

Investing should always be for the long term.

Particularly in volatile markets, drip-feeding investments can be a more successful approach than a one-off investment.

In our example table you can see a comparison between:

Even though the underlying price of the units ends the same as at the start of the year (£20) because of market volatility the pound cost averaging approach beats the lump sum approach hands down.

Diversifying across time in this way should allow your investments to dampen the impact of market volatility with ease. 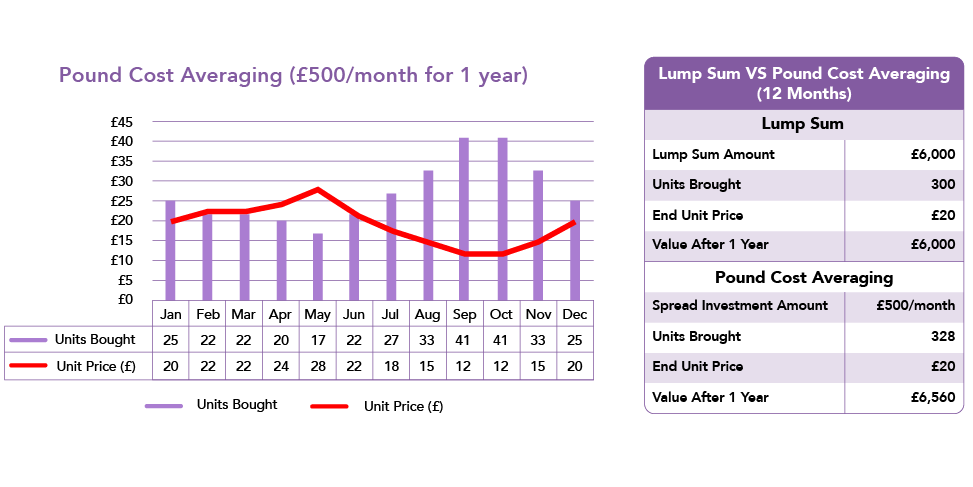 Why does this matter?

Pound cost averaging is a proven method for dampening the effects of market volatility, yet it can be abandoned for the wrong reasons.

This is mainly because the average person can lose sight of the discipline, as markets alter, but the reasons for this are because of two, almost overwhelming, forces of overconfidence.

Stick with the rules

You know that you shouldn’t:

Yet we have hospitals and ambulance crews who will tell us that they are answering calls from many who know better.

They knew that they shouldn’t but some overconfidence drew them away from that sensible idea: why?

The overconfidence effect is a well-established bias in which a person’s subjective confidence in his or her judgments is reliably greater than the objective accuracy of those judgments, especially when confidence is relatively high.

Overconfidence is one example of a miscalibration of subjective probabilities.

Throughout the research literature, overconfidence has been defined in three distinct ways:

The most common way in which overconfidence has been studied is by asking people how confident they are of specific beliefs they hold or the answers they provide.

The data show that confidence systematically exceeds accuracy, implying people are more sure that they are correct than they deserve to be.

By contrast, the key finding is that confidence exceeds accuracy so long as the subject is answering hard questions about an unfamiliar topic.

For example, in a spelling task, subjects were correct about 80% of the time, whereas they claimed to be 100% certain.

Put another way, the error rate was 20% when subjects expected it to be 0%. In a series where subjects made true-or-false responses to general knowledge statements, they were overconfident at all levels. When they were 100% certain of their answer to a question, they were wrong 20% of the time.

We have demonstrated that you can confidently adopt rules for investing, that achieve the desired result, so why don’t people follow them? Emotions!

You will always be a hostage to your emotions; they are what makes us human and what makes you, well: you.

It explains why people scream at televisions whilst watching sport or punch computers when they don’t work.

The following diagram shows how we might “feel” when watching stock markets too closely. 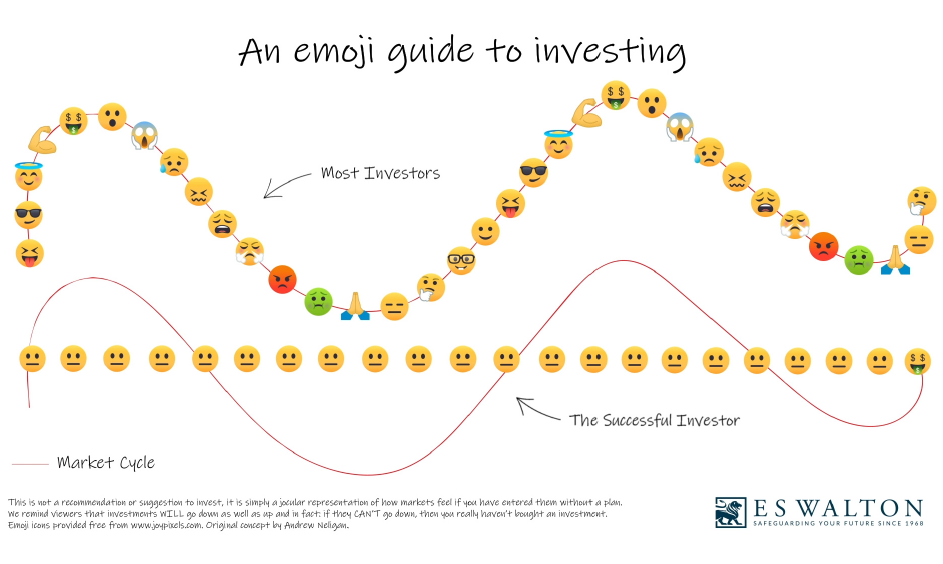 We know that we should remain focused, but our emotions are linked to the markets.

Being happy is a state of mind, affected by external influences and factors, but since

Stress builds when you try to alter something over which you have no influence. Don’t shout at TVs and don’t watch markets!

What could possibly go wrong?

Having been in business since 1968, we KNOW that

Yet, because we can see things happening in real-time and because we can invest and disinvest during the course of that time, people’s overconfidence makes then believe that it is possible to call the market, limit losses and increase profits. 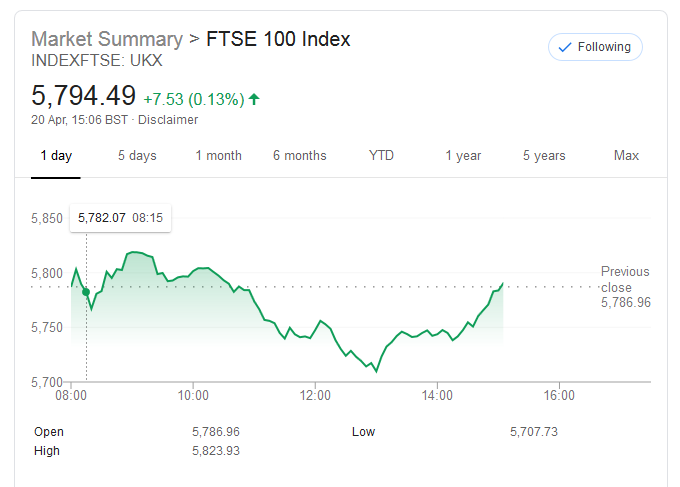 You might be able to spot trends, but we defy anyone to predict what will happen next.

Here’s why we have rules and discipline…

There is nobody around who can consistently time the market; if they could, then their wealth would be astronomical.

Timing the market is as valuable as leprechaun’s crocks of gold, unicorn horns, and dragon’s wings and equally believable, so don’t go looking for it or them. (Let us know if you find them, though!)

Let’s say that you are an investor looking at what you should be doing with your funds during March 2020.

Your overconfidence tells you that you can spot trends, interpret markets, and time your investment. You can’t, but you think that you can.

You have been gathering market intel as follows: 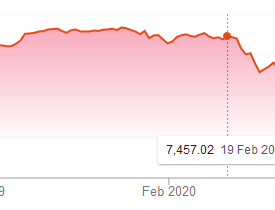 You study the daily data:

For four consecutive days, the market has risen; time to jump in the data tells your overconfidence. 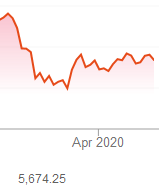 Your emotions tell you that this was the wrong thing to do and so you want to bail out, but if you lose discipline now, then you will lose money – guaranteed.

You have invested and that is the ONLY thing to consider.

And next month, your pound cost averaging will have you investing again

Time in the market

The evidence points more to simply being IN the market, than trying to know WHEN to be in the market, as this infographic shows: 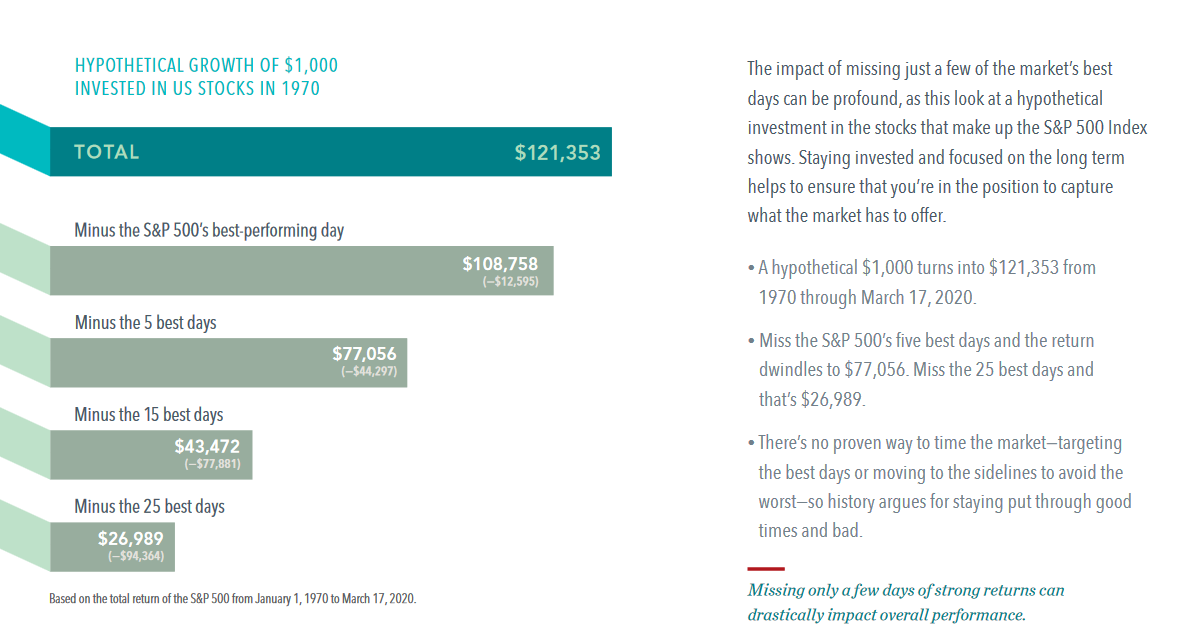 In other words, the matter of being in the market is dependent solely upon whether you need to return from markets, or not.

This website uses cookies to improve your experience while you navigate through the website. Out of these, the cookies that are categorized as necessary are stored on your browser as they are essential for the working of basic functionalities of the website. We also use third-party cookies that help us analyze and understand how you use this website. These cookies will be stored in your browser only with your consent. You also have the option to opt-out of these cookies. But opting out of some of these cookies may affect your browsing experience.
Necessary Always Enabled
Necessary cookies are absolutely essential for the website to function properly. This category only includes cookies that ensures basic functionalities and security features of the website. These cookies do not store any personal information.
Non-necessary
Any cookies that may not be particularly necessary for the website to function and is used specifically to collect user personal data via analytics, ads, other embedded contents are termed as non-necessary cookies. It is mandatory to procure user consent prior to running these cookies on your website.
SAVE & ACCEPT